I banged my first black girl since March 2016 last night. Most guys I know aren’t a fan of the black booty but I get the jungle fever every once in a while. I’ve slept with quite a few black girls now, most of them pre-game when I lived in South Africa and they all had one thing in common; they were great in the sack. They all had big lips, big asses and were great at blow-jobs. They all seemed to be sweet and innocent (except this one) until I got them into the bedroom where they would turn into filthy animals. Here is the latest story…

It was 6pm on Friday evening as I departed the office having resisted the urge to go for beers with colleagues. It was a perfect evening for daygame, around 22 degrees, no wind and the Sun would not set until 8.30pm.

As I walked towards Swanston street I spotted a very hot little Vietnamese looking girl walking in my direction, she was short but had a body like an hourglass and a very pretty face. I opened, had a great set only for her to tell me she was actually on her way to meet her boyfriend who she lives with. I was disappointed but as I departed she thanked me for having the balls to talk to her, it’s always good to hear this.

I carried on and was opening every 10 minutes, it was the most quality I had seen in Melbourne to date. I didn’t close any of them as they all seemed to have boyfriends, or at least they said they did. That was until I saw the black girl.

The lights went green to cross and I examined her face as she got closer, it was young but not the best, her teeth looked a little crooked so I dropped her a couple of points as I let her pass me by. I turned my head to check her out from behind and then I saw the big booty, I could see the outline of what looked like a red thong through the white fabric of her spray on pants. She went back up a point and I instantly got a boner, it wasn’t a DNA tug but I really wanted to bang her so I turned about and made chase.

I got in front of her and I don’t actually recall what I said to her. I just remember that she had a very nervous smile and took a step back as I was rattling through my stack. When she eventually spoke I was surprised to hear that she had an Australian accent. We spoke for 5 minutes and she never really seemed to relax.

She was born in Sudan and moved to Australia with her family when she was 12. I complimented her on her physique and told her that she must be a gym freak as I poked her bicep. She returned the compliment and told me that I looked like I’d been working out as well, finally someone noticed! Despite all this, each time I tried to inch inwards she would back off. I asked her what she was up to and she told me that she was on her way to meet her friend for dinner. I told her I’d like to take her out another time and we exchanged numbers.

As I walked away I was certain it was going to go only one of two ways; she would block me OR I would bang her, nothing in between. I carried on my merry way and put her to the back of my mind as I carried on opening other girls. Then at just before 8pm, she text me first… 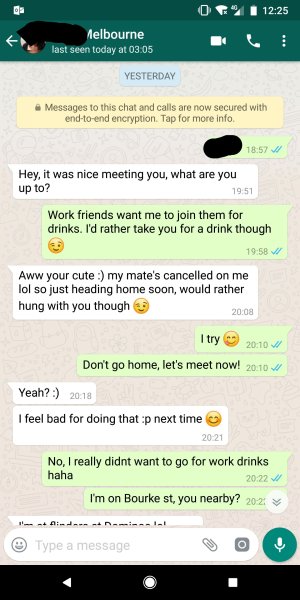 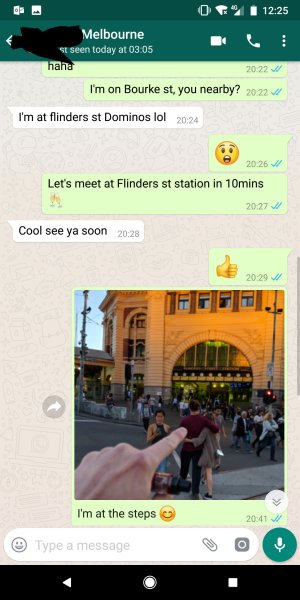 It was clearly going to be the latter and as you can see from my texting, I wasted no time in nudging things in that direction.

It was almost 9pm before she turned up as she got a little lost. As we walked back up Swanston street lots of male heads would turn in our direction, I clearly wasn’t the only one who noticed her ass.

I walked us to the same rooftop bar I took the kiwi to and we sat opposite each other on a small table. I asked for a pint of beer and the soy boy waiter informed me that they only served “pots”, these are half pints. I begrudgingly got one and she ordered a cocktail.

We did the comfort fluff, I found out she was 25, the eldest of 7 siblings and was doing a part time finance course whilst working as a waitress. Her family had left Sudan due to a war between the Muslims and the Christians, she was a Christian. I let her tell me her sob story before telling her that my mother told me never to talk about politics, religion or exes on a first date. She giggled and finally seemed like she was starting to relax.

We finished our drinks and tried a couple of other venues nearby but they were all packed and noisy due to it being Friday night. I walked us to an old mans pub and it was perfectly quiet and there was a booth free at the back. I got the drinks in again and we sat beside each other in the booth. I started the questions game and her first question was “what do you want from this?”.

I told her that I hadn’t set out with any particular goal in mind (I had), but that I wanted to take it as it went, live life in the moment and if something happens it happens, if not, so be it, blah blah blah. She lapped it up.

I kissed her shortly after this and her big juicy lips were ravenous. We had one more drink as we carried on with questions and kissed a few more times. She started complaining of back pain and I suggested that we go back to mine, she could stretch out on the couch as I played the guitar.

She initially said no before changing her mind 5 minutes later. As we departed the bar I hailed a cab and we were in my apartment within 10 minutes.

As she came in she took her shoes off voluntarily and plonked herself down on the couch and lay on her back. I got us another drink before playing a couple of tunes on the guitar as she lay there.

I put the guitar down and grabbed her hand “I can sort your back pain out”. She followed and lay face down on my bed as I gave her a back massage. I lifted her top to put some lube on her back and she undid her own bra as it opened from the front and took it off at the same time as her tank top. I carried on with the massage for a couple of minutes before rolling her over and kissing her.

Soon afterwards all our clothes were off and she proceeded to give me one of the best blow-jobs I’ve ever had. I made sure to put on a condom before I banged her doggy style and took great pleasure in spanking that great big ass as I did so.

She was pretty keen to get home straight after this as she still lives with her parents and it was now after 2am. I ordered her an uber and off she went into the night.

The second month of the New Year has just begun and I’ve captured two new flags so far. Melbourne is still shit.

I am not Roy Walker. I don't look like him, I'm 44 years younger than him but I do sound like him as we hail from the same land. This is not a tribute to Roy Walker. I am using his name solely to maintain anonymity. Roy hosted an 80's TV show called Catchphrase (it's still going now but has a new presenter). On this show contestants try to guess well known catch phrases or sayings from animated picture puzzles. In an effort to assist the contestants Roy Would say "Say what you see!" In his Norn Irish accent. I think of Roy every time I approach a woman. Not in a sexual way. When I am approaching these women I am typically on the street, during the day, sober. I am a daygamer. View all posts by roywalkerdaygame